skip to main | skip to sidebar

Come and find me: Clare-Cooks.com
Posted by Clare at 9:21 am 1 comment:

It has been very, very quiet round here of late. I apologise. I am working on something new which will hopefully be unveiled shortly. xxClare
Posted by Clare at 9:56 pm 1 comment:

I wrote a guest post on the important subject of pizza for my friend Lily Rae's blog, Bad Salad.
Posted by Clare at 3:34 pm 1 comment:

Following Christmas and New Year indulgences, I'm usually happy to embrace a bit of healthy living in January. The beginning of 2012 saw me not only hungover but engaged (with all the narcissistic worries about wedding photos that goes with that happy state) so when my new personal trainer suggested I try a couple of weeks carb-free I agreed to give it a go.

And swiftly began to regret it.

No fruit and no porridge meant breakfast was the hardest. Unless I got all organised and made some mini frittatas the night before (put a bit of wilted spinach in the dimple of a bun-tray, pour on beaten eggs and bake for 15 minutes - one egg makes three) then I was reduced to eating a packet of ham with my morning coffee. Not disgusting exactly, but ever so slightly wrong. A plain yoghurt and a handful of almonds were equally uninspiring reasons to get out out of bed.

Dinner and lunch were OK. I like fish and chicken and I like vegetables and salad. I could have those things in many, many combinations before I got bored of them. But I missed carbohydrates as a "base" for something else: nutty brown rice with a spicy chilli or fragrant curry, a baked potato, crisp on the outside and fluffy within to have with gussied-up tinned tuna and, most of all, pasta in all its numerous forms, each designed to hold a subtly different sauce.

Jam a vegetable on the spikes, turn the handle and hey presto, pretty strands of "spaghetti". It's big in the raw food community but I found that courgettes make for the best approximation of pasta and that the noodles are much nicer if lightly steamed or warmed through briefly in the pan with the sauce. It's not quite a substitute for the real thing, but retains a pleasing al dente bite and is bland enough to go with most things you might want to top it with. 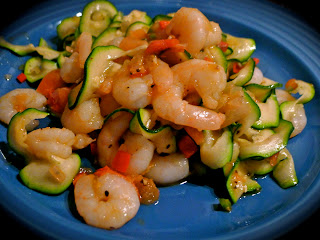 My first spiralizer-based dinner was courgette "tagliatlelle" with chilli and garlic prawns which turned out well. The next night I used a finer blade to make "spaghetti" to go with a bolognaise.

My two weeks without carbs are over now (it sent me slightly insane, causing James to Google "carb free" and "mood swings", but was otherwise successful) and only time will tell whether the spiralizer is one of those kitchen gadgets that remains a favourite or if it gets relegated to the cupboard under the sink but I'm still pretty excited about it.

Dinner tonight was soup made with a couple of sachets of miso soup, a handful of beansprouts, baby spinach leaves and some tofu. By the time the kettle had boiled I'd made two types of noodles (courgette and carrots) and the whole thing was a satisfying remedy for a cold caught over the weekend. And pretty damn healthy considering it's right at the end of the month.
Posted by Clare at 10:29 pm No comments:

Spring Is In The Air

The weather has finally brightened, meaning it's not a total misery to eat salad for dinner. Here's a couple that pleased me last year: 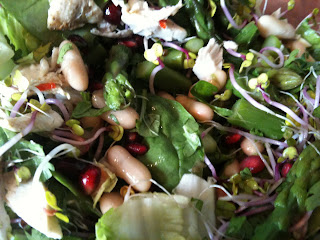 Grilled chicken, little gem lettuce with asparagus, cannalini beans, alfalfa sprouts, pomegranate seeds and torn basil leaves. I'm pretty sure the dressing was the standard one I usually make: 3 to 1 oil and white wine vinegar, dijon and wholegrain mustards, crushed garlic, sugar, salt and pepper. It would work made with lemon juice instead though. 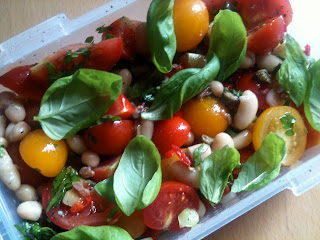 And this one was made for lunch the next day to use up the leftover beans. They're mixed with red and yellow tomatoes and basil with a dressing made of olive oil, red wine vinegar, chilli, garlic, anchovies and capers. I like the mixture of different sorts of tomatoes, although more for aesthetic reasons than for flavour. Sometimes I used halved cherry tomatoes and bigger ones cut into sixths or eighths. There's something pleasing about the contrast in shapes and sizes. These ones came from the stall at Borough Market which sells tomatoes from the Isle of Wight.
Posted by Clare at 10:54 pm No comments: 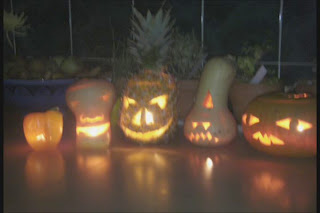 It's Halloween soon. Woooo-oooo-ooooh. Spooky.
Personally I prefer to carve peppers rather than pumpkins. They come ready-hollowed and in a variety of colours. But pumpkins are good too. I'll be doing a massive one on Sunday and making soup with the insides. I'll also be hosting a vegetable carving competition. Prizes for the most frightening lantern and for the most original choice of vegetable. I'm a little over-excited at the prospect.
As well as the competitive gourd-whittling there will be warming autumnal food. I haven't decided what yet, but pictures and recipes to follow.
I should apologise for the over-long absence, but I shan't. I Dined With Dos Hermanos on Monday which was ace and gave me the kick start I needed to start blogging again and I shall try to be less lax in future.
UPDATE: There were some impressive vegetable carving skills on display on October 31st, but sadly my camera is broken and the iPhone failed to capture them in all their exquisite detail. You can get the general idea though. Here are Helen Z’s incredible butternut squash townscape relief, two alarming aubergines by Simon and Martin, a never-attempted before turnip/globe artichoke mash-up by Polly, James’ thuggish gourd and my pumpkin. 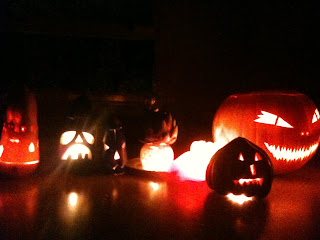 The innards of the pumpkin got turned into soup, but I’m not really sure it was worth the effort. I added the flesh to onions that I’d softened in butter with garlic, cumin, cinnamon, dark brown sugar and a tiny pinch of chilli flakes. I waited until the pumpkin cooked down into a lovely, buttery, fragrant pulp before adding the stock. Which is where it all went wrong.

Sainsbury’s “Signature” Chicken Stock tastes of very, very little. It suppose it serves me right for believing that the kind of stocks you get in plastic pouches will somehow be better than something made from a cube. (Yes, I know it would be best to make my own, and I do sometimes, but I’ve not got a proper freezer so it’s not available on demand...) Anyway. It imparted its flavour of very little to my soup which had previously been so enticingly spicy.

I managed to rescue it by reducing the liquid a bit and adding a lot more cinnamon and plenty of salt and pepper. It was served to hungry vegetable carvers with sour cream and paprika-toasted pumpkin seeds who seemed appreciative enough, but I’d rather gone off pumpkins for culinary purposes by then.

Jeez, it’s been ages hasn’t it? I doubt anyone but me has even noticed the absence of updates on this personal vanity project, but I was beginning to be sorely affronted by my own silence and thought I better do something about it. Also, I recently had a meal that forced me to re-evaluate the Nicest Things I Have Ever Eaten list (I’ll give you the full rundown some other day) so it seemed as good a time as any.
We went for a walk to a castle in a gale-force wind, watched a massive torch-lit procession and had things (including a DVD from their library) delivered to our room. It was great.
Tuscan Kitchen’s ravioli were full of them. The oval parcels of perfectly cooked pasta contained a smooth, truffle-studded filling and were basking a creamy, cheesy sauce containing plenty of generous shavings too. I would have licked the plate if such things weren’t frowned on in polite company.